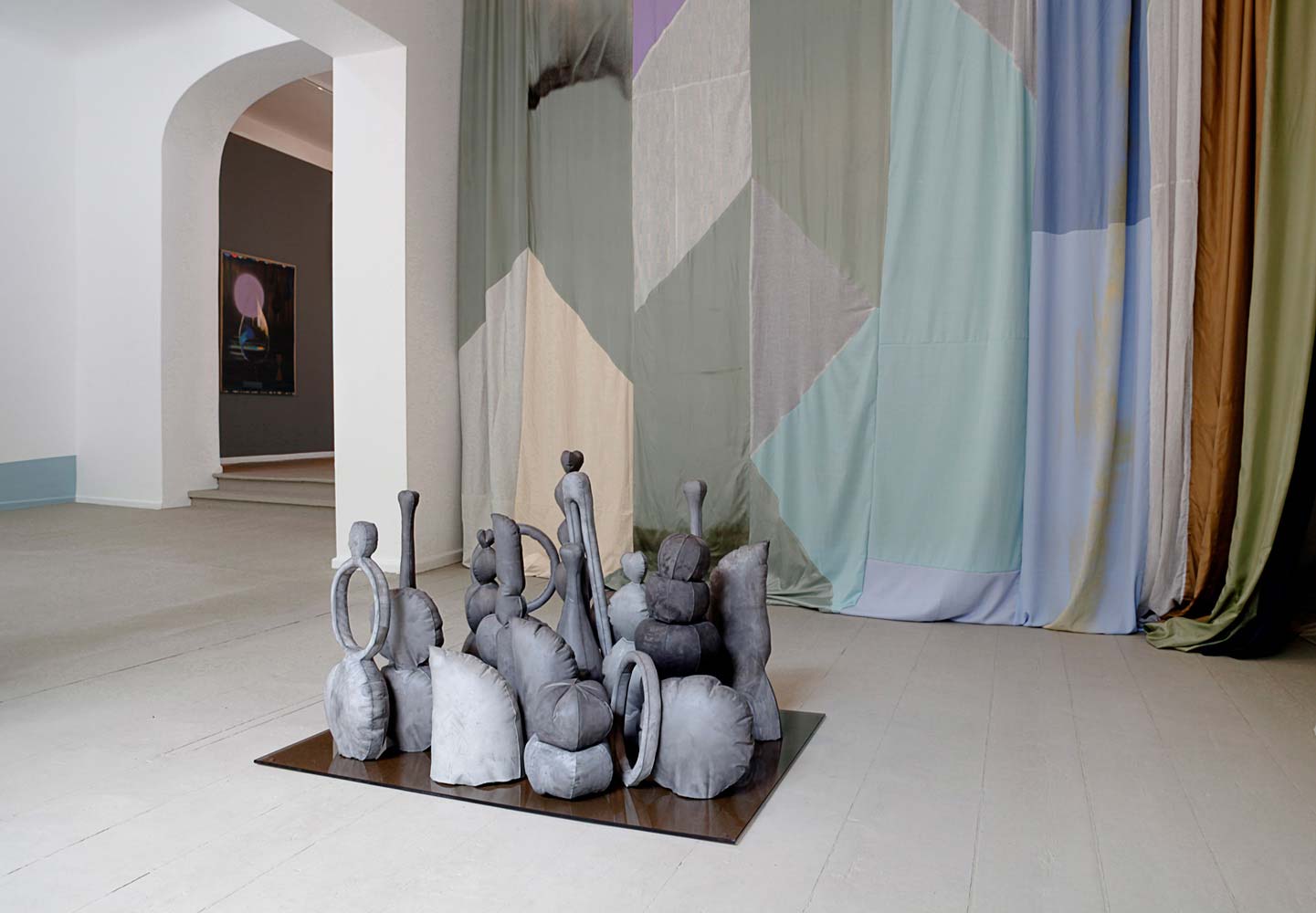 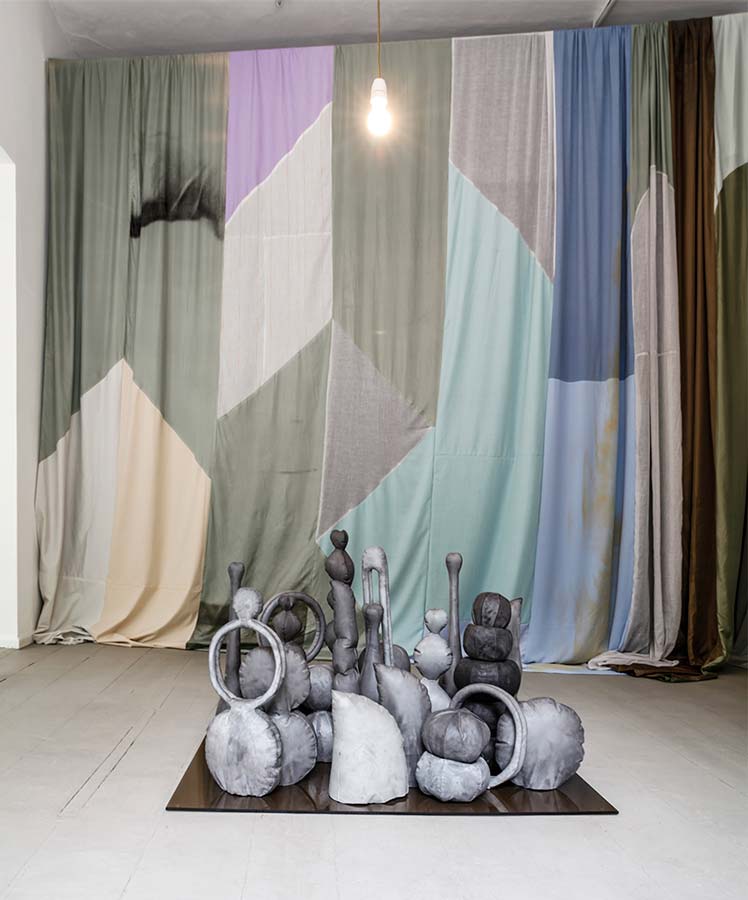 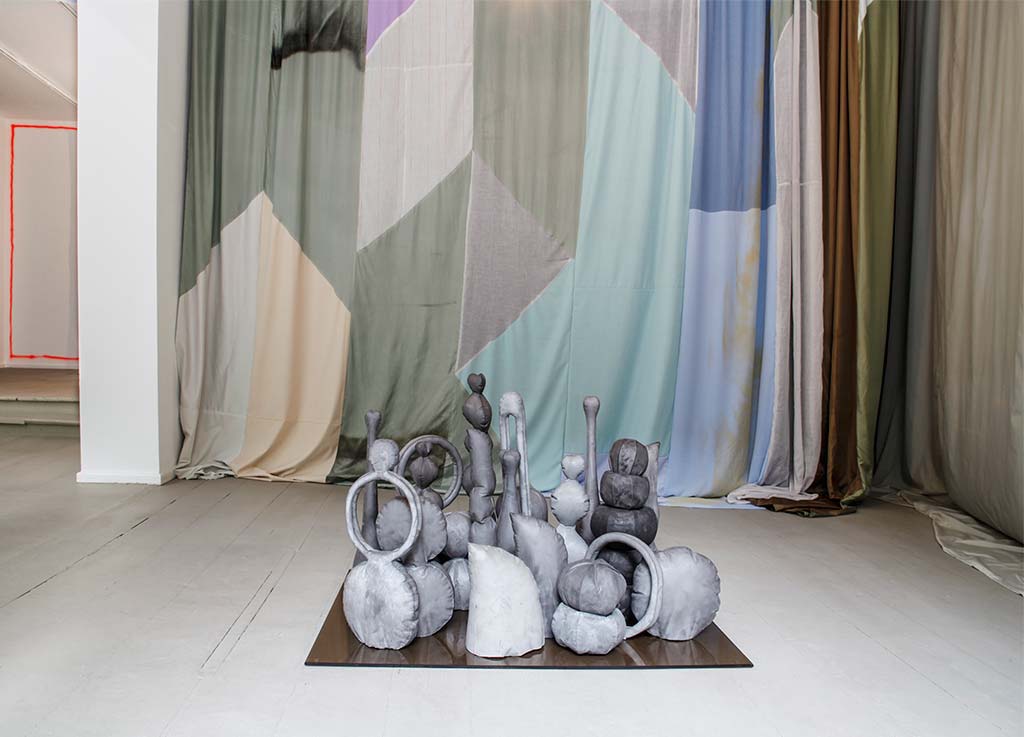 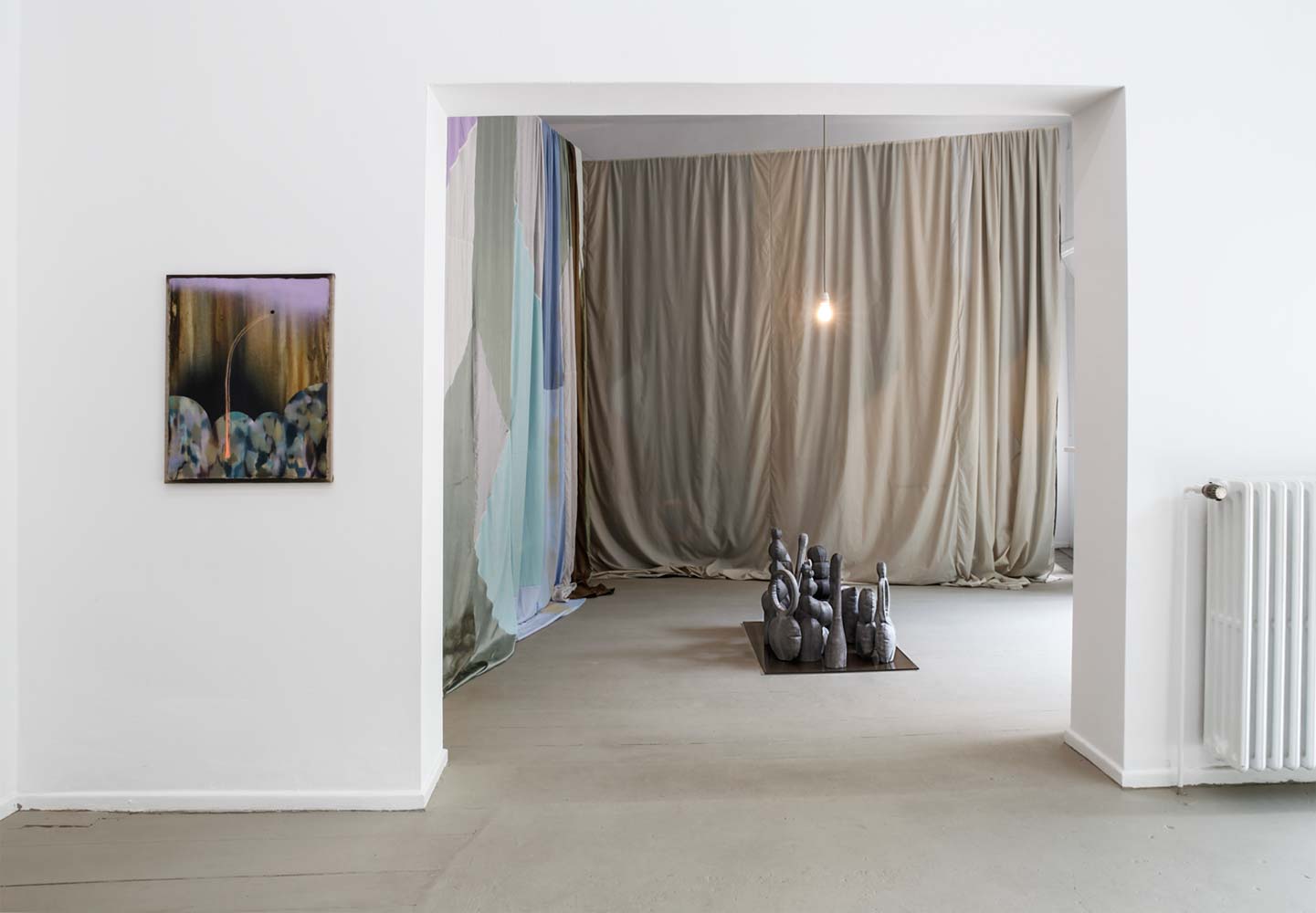 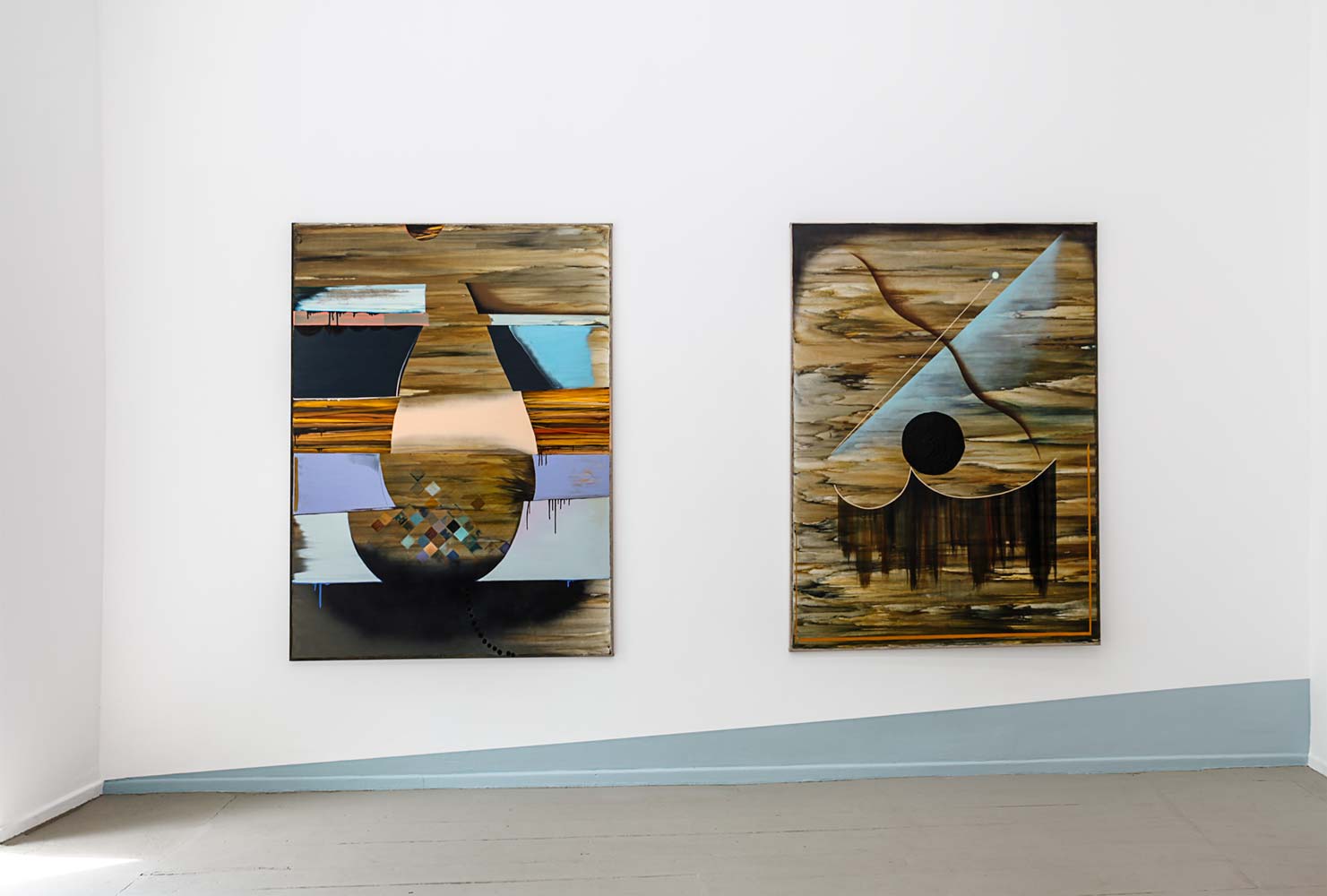 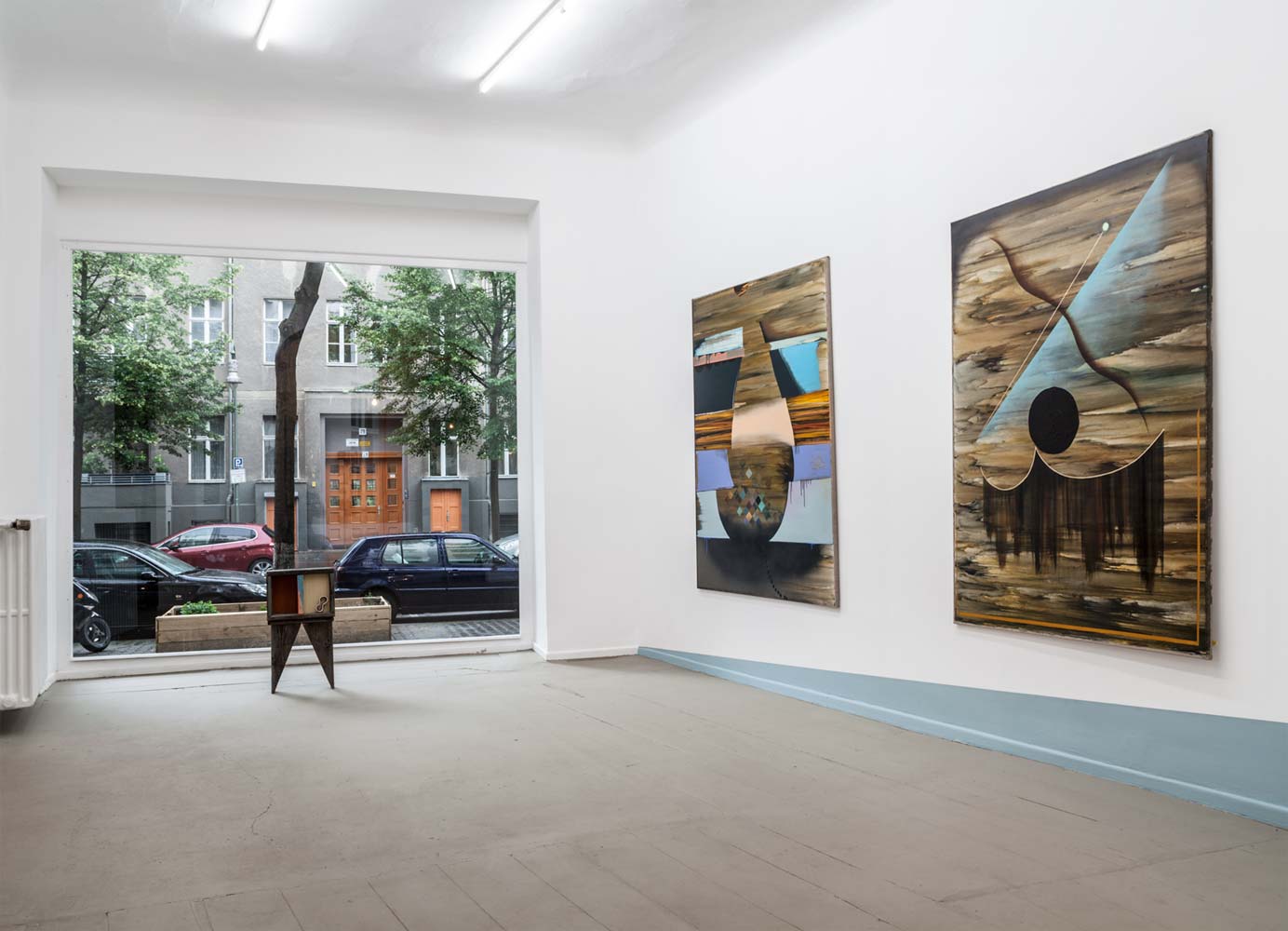 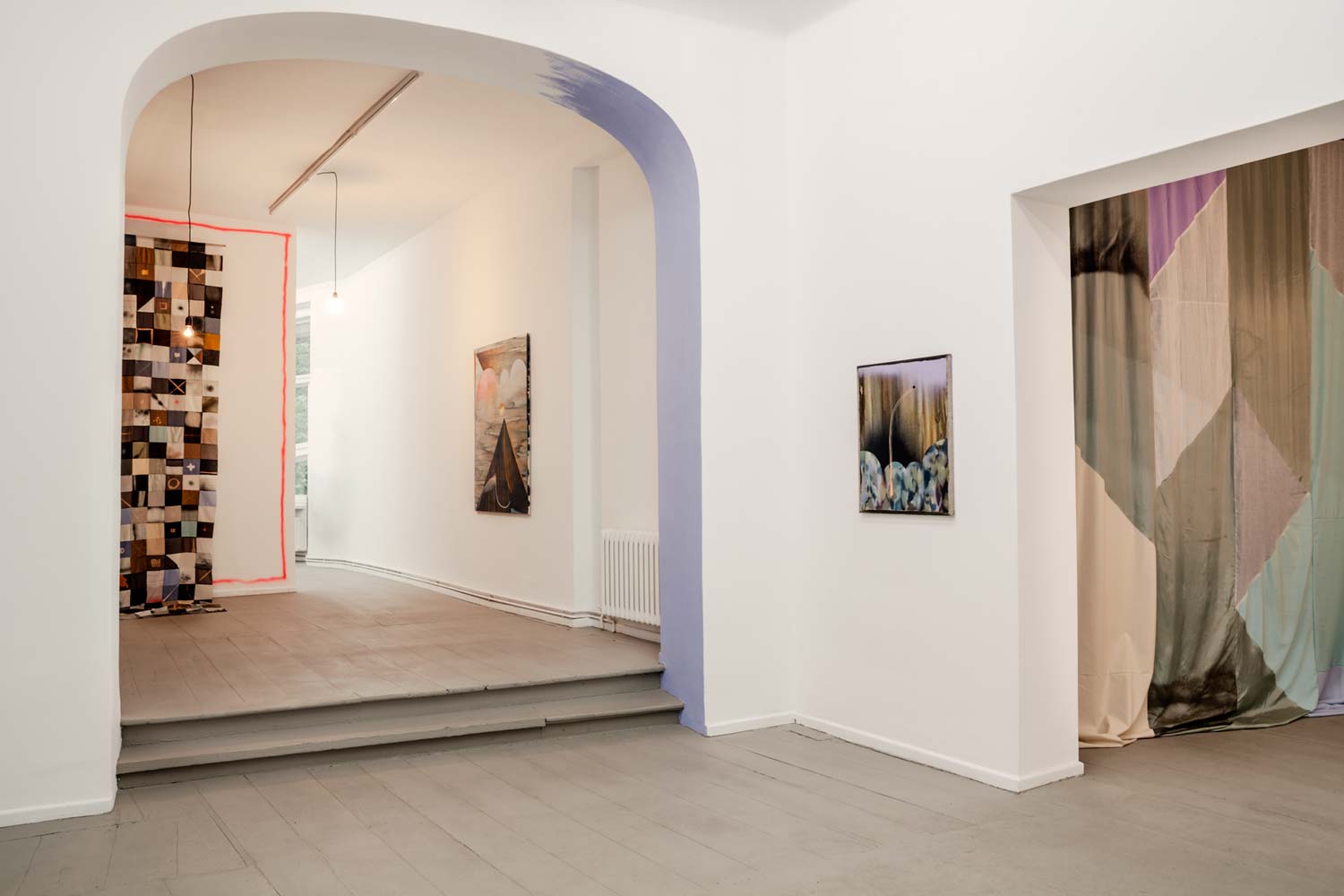 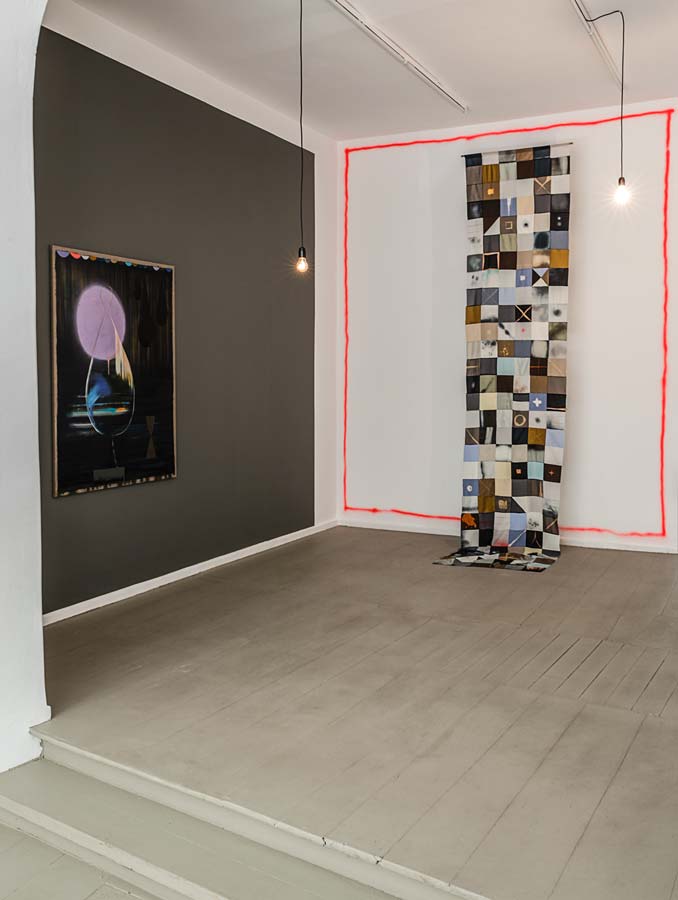 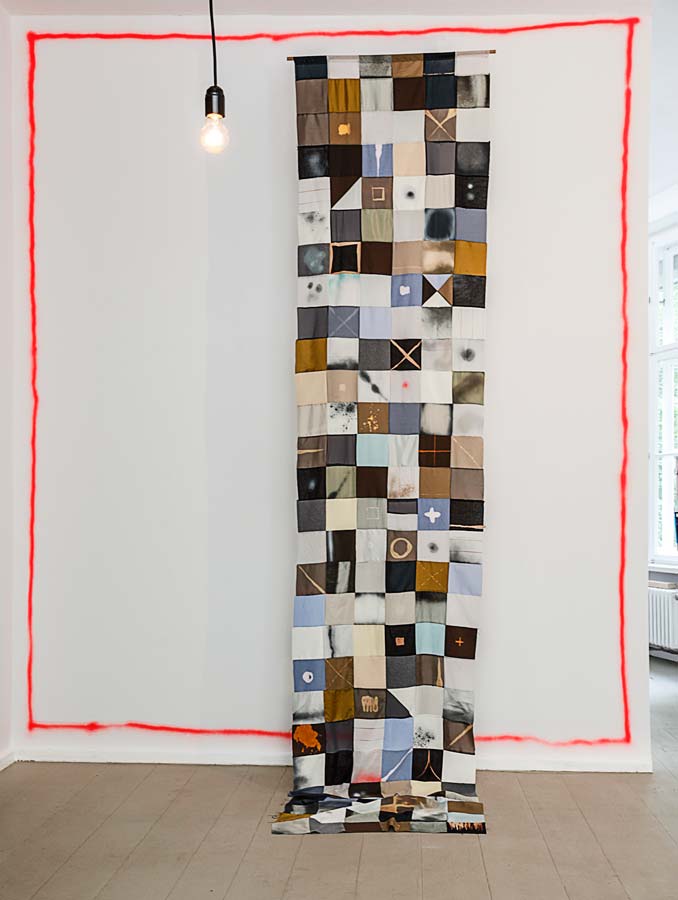 Sometimes It Lasts Forever. And Ever.

Grit Richter’s installations combine painting, sculpture as well as wall painting and drapery that engage in the entire space. In her work, the artist is constantly seeking figuration in abstraction. Her tragic yet comical figures and situations are formed by geometrical lines and colour fields that are covered, protected and structured by opaque shapes and formations.

Monochromic and patchwork drapery mark the wall in the first room of the gallery. They provide shelter and serve at the same time as a stage setting for a group of sculptures, entitled Sometimes it lasts forever. And ever. Abstract figures made of grey plaster are standing closely together on a brown tinted glass plate. The sculptures are formed in fabric casting moulds, which is peeled off in a very slow and precise process that resembles a surgical intervention. Some fragile figures of the group are not able to stand on their own and have to be held by stronger ones – however they are an important part of the entire constellation.

Cloudbusting and Der längste Tag are installed as a pair in the adjacent room. A field of light blue connects the work with the space. Cloudbusting shows a wafting corpus that is kept in check by coloured blocks and yet seems to float. Der längste Tag carries on the disentaglement of the figuration: a large black dot as the absolute geometrical form is located in the center of the painting on a brown-green background. A glowing light dot is positioned as a counterpart above the black one. A blue panel is splitting the image diagonally and is being crossed by a wavy line. Whereas Cloudbusting in contrast to its colourfulness is depicting a particular gravity and immobility, Der längste Tag conveys a powerful calmness.

Coloured areas provide the background for the work And The Audience Was Freaking Out. A round figure emerges on an almost black background. It stands elevated and exposed on a small rectangle. Multicoloured semi-circles canopy the scenery, lucid stripes come out of the dark background. A large violet circle blinds the view onto the head – what is being performed?

Home is a drapery made of numerous different squares of fabric that is sewed together like a chess board which are partly sprayed, painted or dyed. Hanging like a flag the work is installed from the ceiling to the ground. Starting point for the piece was the housing development in which Richter grew up. Each living unit with its individual needs, worries and characteristics are reflected in the single squares.

Grit Richter’s works evolve out of the alliance of conscious and unconscious, individual and collective memories as well as emotional patterns. She seeks images of spaces for the unutterable and articulates essences that also stay formally ambiguous. Her abstract figures serve as a placeholder trying to give form to what is elusive, to make it concrete and thus become comforting. Her work displays an openness and at the same time a complexity and density that she induces by reduction and finds in abstraction.